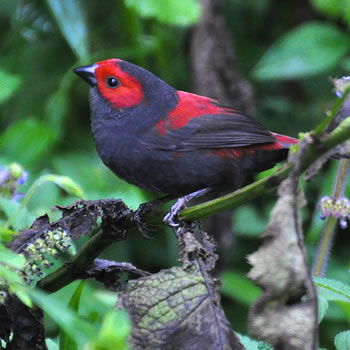 This is a specialized Birding safari that demonstrates how Uganda is 'Gifted by Nature.' This safari takes you through Uganda's top birding destinations with the help of a superior network of bird guides. Our experienced guide will lead you through the beautiful, rugged, and biologically diverse Queen Elizabeth and Murchison Falls National Park, Kibale forests, as well as Africa's best Shoebill bird location, the Mabamba Wetland.

Day 1: Arrival for the birding safari in Uganda

Our professional bird guides will meet you at the airport in Entebbe upon your arrival and transfer you to your hotel of choice. Depending on the time of arrival, we may start our safari with bird watching around the shores of Lake Victoria in Entebbe. Stay in Lake Victoria Hotel, Lindsay Cottages or Entebbe Travellers' Inn.

On this day you will visit the Mabamba Village and its adjacent swamp on our birding safari in Uganda, a labyrinth of channels and lagoons located about 52 km from Kampala. The road to Mabamba winds its way through areas of secondary forest and agricultural land attracting Red-headed Lovebird, African Crowned-Hornbills, and a range of sunbirds including the Green-headed, Green, Red-chested, Collared, Marico and Scarlet-chested. We shall stop over at Mpigi Swamp to look out for the Papyrus Gonolek and the White-winged Warbler. The road ultimately ends at a papyrus reedbed adjoining Lake Victoria, where we will explore by canoe a maze of channels and mudflats for a reliable resident, the majestic Shoebill. Although sightings can never be guaranteed, we should have a very good chance of seeing this magnificent bird in Mabamba.

The Mabamba birding site also offers a large selection of other bird species which might include African Pygmy Goose, the rare Lesser Jacana, Carruthers' Cisticola, African Fish Eagle, Winding Cisticola, Fan-tailed Widowbird, Blue-breasted Bee-eater, etc. The rare and elusive Sitatunga Antelope also occurs here but it is very shy and rarely seen. We also expect to encounter the Spot-necked Otter in one of the channels that we shall paddle through.

You will then leave for Lake Mburo National Park in the afternoon reaching in the evening. Dinner and overnight at; Mihingo Lodge, Arcadia cottages, and Mantana tented camp. Lesser Masked Weaver- bird Uganda safaris Common conspicuous birds encountered whilst driving towards Rwonyo Camp, the park headquarters include;

This morning we shall head to Bwindi Impenetrable forest (Ruhiija and Buhoma) birding and Gorilla tracking with other primates. Bwindi Impenetrable Conservation Area lies in the rugged Kigezi highlands of South Western Uganda, protecting a continuum of forest that ranges from montane to low land areas. It is this altitudinal variation, combined with its location within the Albertine Rift that results in Bwindi impenetrable being the richest forest in East Africa in terms of its trees, butterflies and birds. Bwindi is a home to 360 Gorillas a half of the world's population of mountain gorillas. Accommodations here include; Trekkers Tarven, Gorilla Mist Lodge, Gorilla Resort, Gorilla Forest Camp, Engagi Lodge, Community camp ground.

Bwindi forest is a bird watchers' haven, it holds 347 species of birds. The forest has 10 of the 26 globally threatened species in Uganda, five of which are vulnerable. Bwindi has 23 of the locally Albertine Rift endemic species in the country and some, such as African Green Broadbill, Chapin's Flycatcher and Shelley's Crimson-wing have limited distributions elsewhere in their range.

The park has 76 of 144 Guinea - Congo forest biome species that occur in Uganda, recorded especially in the North sector. Bwindi Forest also qualifies for Afro tropical highland biome species with 68 of 86, and for the Lake Victoria biome with 4 of 12 species. The park is blessed with 90% of all albertine rift endemics, difficult or impossible to see in any other part of East Africa and seven IUCN red data listed species. An experienced birder watcher can identify over 150 species in a day.

This morning after breakfast you will leave for Queen Elizabeth National Park. After an early morning breakfast we begin the long drive to the renowned Queen Elizabeth National Park, frequently stopping for birding along the way. Going through the Ishasha sector of Queen Elizabeth will give us a chance of seeing the Tree-climbing lions. Tree climbing Lion- bird Uganda safaris Spanning the equator is the vast Queen Elizabeth National Park boasting impressive crater lake scenery, expansive grasslands, papyrus swamps and tropical forests, huge herds of Elephant and Buffalo, Lions, Leopards, and a diverse array of birds. It contains Uganda's best game populations as well as some of Uganda's best bird watching sites, an incredible bird list of 610 bird species and an overwhelming record of 296 species in a single day, makes this birding site the highest not only in Uganda but in Africa!

Depending on time of arrival, some late afternoon birding might produce views of the African Morning Dove, Grey-headed Kingfisher, Black-headed Gonolek, Slender-billed, Yellow-backed and Lesser-masked Weavers, Pin-tailed Whydah and Black-winged Pratincole. The following day, we have an early start of bird watching in Uganda and a game drive in the park towards the Kasenyi trail. The game drive takes us through a productive area of grassy plains, which support large flocks of a variety of stork species including the Spectacular Saddle-billed and Woolly necked Storks. Other species include the Bateleur, Grey Kestrel, Lappet-faced, Ruppell's Griffon, White-backed and Palm-nut Vultures, African Crake, Black Coucal, Common Button, Harlequin and Black-rumped Quails, Red-necked Spurfowl, Rufous-naped and Flappet Larks. Common mammals include Uganda Kob, Lion, Warthog, Bush Buck, Deffassa Waterbuck, Spotted Hyena, Leopard and many others. In the afternoon we take a launch tour of the Kazinga Channel which is a natural magnet for herds of Elephant, Giant Forest Hog, Buffalo, Monitor lizard, Crocodiles and the abundant Hippopotamus. Birding here is excellent with great photographic opportunities. We might be blessed with congregations of African Skimmers, Great-white and Pink-backed Pelicans, Great and Long-tailed Cormorants, Open-billed Stork, African Skimmer, White-faced Whistling Duck, Marsh, Wood and Common Sandpipers, Malachite Kingfisher, African Jacana, African Wattled Plover, etc. Stay in Mweya Safari Lodge, Mweya Hostel Kyambura Lodge, Jacana Lodge, Katara Lodge, Enganzi Logde or Kingfisher Resort for 2 nights

Kibale Forest National Park protects a diverse array of primates, from the minuscule, nocturnal Demidoff's Galago to our closest living relative, the Chimpanzee. Here we will take expeditions to observe the Chimps and many other species of primates and birds. We have a chance of birding the main road or one of the trails in the forest. We might come across the African Emerald Cuckoo, Purple-headed Starling, Black-billed Turacco, Yellow-billed Barbet, Grey-throated Barbet, Blue-throated Roller, Narrow-tailed Starling, Western Black-headed Oriole, Yellow-throated and Yellow-rumped Tinkerbirds.

The next day, we wake up very early and assemble for briefing prior to Chimpanzee Tracking and thereafter enter the forest to look for our cousins, the Chimps. The activity takes 1 to 5 hours. In the afternoon, we may choose to go bird watching in Bigodi Wetland or take one of the trails in the Forest to look for the stunning Green-breasted Pitta, Fire-crested Alethe, Scaly-breasted Illadopsis, colourful butterflies and other species of primates.Dinner and overnight ; Chimpanzee Guest House, Ndali Lodge, Primates Lodge.

This morning you will drive towards Budongo Forest Reserve in Masindi. This is a rather longer drive but there are a few birding spots along the way. This forest is part of Murchison Falls Conservation Area and is the largest natural forest in Uganda and East Africa as a whole. It lies on the escarpment northeast of Lake Albert. The reserve occupies gently undulating terrain, with a general slope north-northwest towards the Rift Valley. Specialties in Budongo Forest include among others; Sabine's spine tail, Cassin's Spine-tail(rare), Pygmy Crake, Kingfishers (Chocolate-backed, Blue-breasted, African Dwarf), White-spotted Fluff tail, Ituri Batis, Puvell's Illadopsis, Brown Twin-spot, Cameroon Somber Greenbul, Cassin's Hawk-Eagle, Crowned Eagle, Yellow-crested Woodpecker, Forest Robin, Little Green Sunbird, Grey-headed Sunbird, Olive Green Camaroptera.

The following day, we will be at Budongo's famous Royal Mile by early morning - a wide forestry track considered by many to be the country's premier forest birding locality. This is the best place in Uganda for Nahan's Francolin, Cassin's Spinetail, and Chestnut-capped Flycatcher. Here we will find many confusing forest greenbull to test us, including Spotted, Xavier's, White-throated, Red-tailed & Honey guide Greenbulls. Canopy flocks support Yellow-mantled Weaver, Rufous Thrush and Uganda Woodland-Warbler. Undergrowth alongside the track holds numerous skulkers including Scaly-breasted, Brown & Pale-breasted Illadopses, Fire-crested Alethe, Blue-shouldered Robin-Chat, Rufous Flycatcher-Thrush, Red-tailed Ant-Thrush, Yellow-browed Camaroptera, Yellow Longbill and Grey-throated Tit-Flycatcher. We will keep an eye on any openings in the forest canopy as Cassin's and Crowned Hawk-eagles, Cassin's and Sabine's spinetails, and White-throated Bee-eater are all possible. The area around the Park Headquarters is the only site in East Africa for the elusive canopy-dwelling Ituri Batis. In the afternoon, we transfer to the Busingiro section of the forest for yet another awesome bird-watching session. Dinner and over nigh; Masindi Hotel or Court View Hotel.

Today you will leave early for Murchison Falls National. You will have a boat cruise on the calmer stretches will allow us to watch and photograph the birds and the large animals which throng the banks, and we may have chances of finding the world's most peculiar bird, the Shoebill. We will also explore the park's broad-leaved woodland, dry grasslands, and forests, including nocturnal expeditions to find the unrivaled Standard-winged Nightjar. 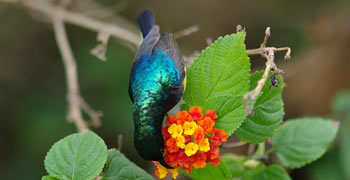 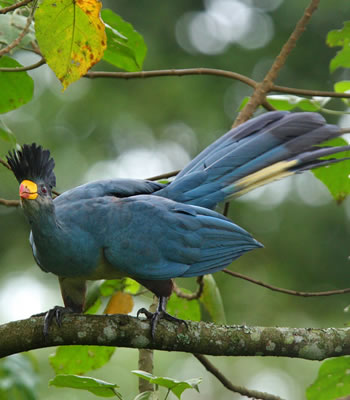 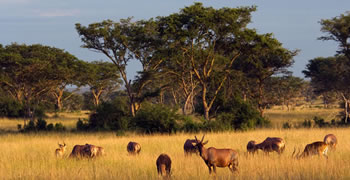 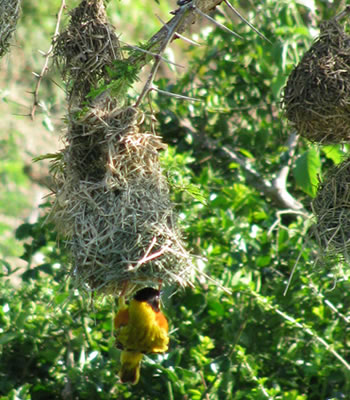 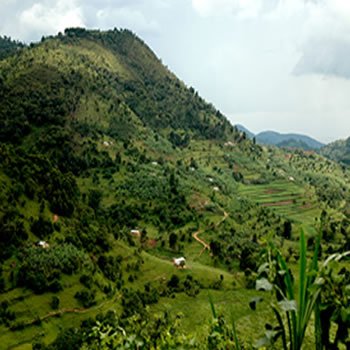 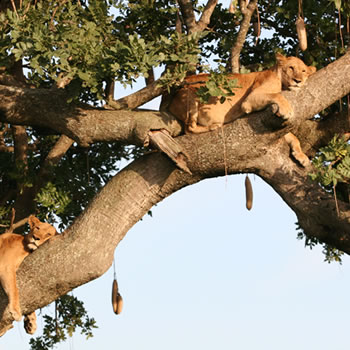